Today, we are going to do something a little different. At the end of the month, Dr. Matthew Teutsch, the Interim Director of the Ernest J. Gaines Center, will say goodbye to us and move on to other endeavors. Before he leaves, we thought it would be a good idea to ask his about his time here, what Gaines means to him, and why Gaines's work is important today. Make sure to keep an eye out for Dr. Teutsch's own blog, Interminable Rambling, which he plans to start in August. As we get closer, we will let you know more about it. 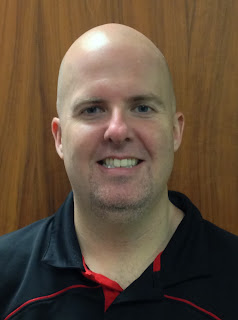 How long have you been at the Ernest J. Gaines Center?

I have been at the center for a total of three and a half years. I started as a graduate assistant in January 2012. At that time, I finishing up my comprehensive exams for my PhD program and starting to focus on the dissertation. As the graduate assistant, I worked on organizing archival materials, creating lists of scholarship on Gaines, leading tours of the center, conducting lectures, and other tasks. In April of 2014, after the director of the center took a new job, I became the Interim Director of the Ernest J. Gaines Center. Since then, I have, among other things, acquired new items for the collection, organized the 50th anniversary celebration for Catherine Carmier, worked with NEA Big Read recipients, hosted a concert by Irvin Mayfield, and lectured to classes across the nation.

What was your first encounter with Ernest J. Gaines?

That depends, do you mean with his writing or with him specifically? With his writing, I picked up A Gathering of Old Men about ten years ago. I read it because I knew Gaines is from Louisiana, and that appealed to me. Afterwards, I thought, “Is this it?” It didn’t really do a lot for me then. I read A Lesson before Dying after that. The story moved me; however, I kind of felt the same way, “Is this it?” I’m not sure what I was expecting—Dante, Shakespeare, Hawthorne, Ellison, or something else. Who knows what I thought.

When I picked him up again, around my PhD coursework, I started to reread Gaines, and I really examined him closer when I started working at the center as a graduate assistant. Then, I realized that Gaines writes what I like to call “deceptively easy” texts. He is very accessible, and for that reason, he has both a popular and academic audience. In this way, Gaines recalls one of his inspirations, Ernest Hemingway, who placed 10% on the surface of the text and another 90% underneath (the iceberg theory). Digging through the surface, we see that Gaines does a lot more than it may appear at first. For me, this keeps me coming back because like any good piece of art each time I come back I see something entirely new and enlightening.

My first encounter with Gaines specifically, I think, came at the cemetery beautification in 2009. There, I worked in the cemetery, which in and of itself provides a very unique perspective on Gaines and his writing. He came out there in his golf cart, and I, as most people would be, approached him tentatively. I don’t recall much from the first meeting, but I do know that I discovered ways to speak with him. For me, I talked about sports, and as time went on, I began to loosen up. Eventually, I realized that for all of his fame, Gaines is a person just like me. He likes his Olde Tyme shrimp po-boys and sitting around and talking. Things I like to do as well.

Once I got past the initial awe of being in his presence, conversation became easier. We would speak about baseball, literature, or food. Hearing stories about Juan Marichal or Hank Aaron always made my day. Hearing him talk about literature, his own writing and that of others, always taught me something new. Hearing him speak about shrimp po-boys, well, just made me hungry.

What has Gaines taught you?

Gaines has taught me a lot of things. Specifically, he has solidified my thoughts regarding art and the multitudinous ingredients that go into the creation of a piece of literature, a painting, a song, or anything. Gaines speaks about Vincent Van Gogh inspiring him. He speaks about Modest Mussorgsky. He speaks about William Faulkner. All of these influences, and more, had a part in the finished project, whether they appear noticeable or not. For me, the interconnections between all of these things and Gaines's work highlights that life, and art, does not exist in an insular bubble. Everyone, and everything, converses together in one way or another. Today, we need conversation and dialogue on numerous issues, and to me, Gaines provides an avenue to begin some of those conversations.

Along with highlighting the interrelatedness of art, Gaines has also taught me history. He has shown me the lives of individuals (African American, white, Cajun, & Creole) in Louisiana. When most people think bout Louisiana, the "exotic" New Orleans comes to mind. Gaines, unlike many other authors who write about Louisiana, does not focus on New Orleans; in fact, the city rarely appear sin his works, and no action takes place there. Instead, Gaines focuses on the lives of rural Louisianians,  similar to the ways Arna Bontemps does in regards to the central Louisiana region. Gaines writes about a people who do not, as the editor in The Autobiography of Miss Jane Pittman points out, "Do not appear in the history books." I would not have known about people like Miss Jane, Copper Laurent, Mathu, Lou Dimes, Candy Marshall, Grant Wiggins, Tee Bob Samson, or others without Gaines's work.

What is Gaines’s importance?

With everything going on in the nation today, I feel that Gaines's work serves a specific purpose. Reading Gaines, it becomes easy to separate the contemporary from the past that Gaines presents. For instance, A Lesson before Dying takes place in 1948, so a reader can look at the novel and say, "That's a terrible story, but it's in the past. Today we don't have to worry about someone like Jefferson experiencing the same trials and tribulations." However, if we look at what has occurred recently, this sentiment does not hold a lot of water. Was Trayvon Martin like Jefferson? I think Gaines shows us that even though slavery ended, "officially," in 1865 and Jim Crow ended during the 1960s, we still have a long way to go.

Gaines's importance comes from the fact that he does not shy away from showing that the "rules," these unwritten laws that work to keep wealthy whites in power and African Americans, and I would even argue poor whites (think Sydney Bonbon and Gil Boutan), in subjugation still exist. They may not appear on the books, but they remain. Matthew Antoine, Grant's former teacher, tells him that no matter how hard Grant tries he cannot scrape away three hundred years of slavery and hate when teaching his students. The students exist in the shadow of the past, and until we confront that past, head on, we will continue the cycle.

Do you have any final thoughts about your time at the center?

The Ernest J. Gaines Center has been a part of my life for the past three years. I never would've thought, when I first picked up Gaines's work, that I would have the opportunity to work at the center and to explore his works in the ways that I have done over the past couple of years. Looking back, I think my time can be summed up by Aunt Clo's description of Aunt Fe in "Just Like a Tree." The story, told from multiple points of view, tells about the last night Aunt Fe spends in the quarters before her family moves her North. Every section carries the narrative forward, except for Aunt Clo's. Her section poetically compares Aunt Fe to a tree being "jecked" out of the ground and dragged to the North. After removing the tree from the ground, one looks into the hole created and sees the taproot remaining. For me, the center is that taproot. I may leave, but a part of me will always be a part of this place.