Ernest Gaines has made his admiration for Major League Baseball Hall of Famers Jackie Robinson and Willie Mays well known. Living in San Francisco, Gaines became a lifelong San Francisco Giants fan, cheering the team on even when he returned to Louisiana to reside permanently. In 2007, Giants slugger Barry Bonds approached Hank Aaron's record of 755 home runs. Aaron told reporters that he would not attend the games where Bonds would possibly break his record, and speculation began to swirl about this decision. Many saw Aaron's refusal to attend the games as a reaction to the numerous rumors of Bonds's steroid use. Mike Gimbel pointed out that reporters overlooked part of Aaron's statements regarding his decision to stay away from the ball field. Instead of taking away from Bonds, Gimbel argues that Aaron chose to not attend so that Bonds could enjoy the full spotlight of his accomplishments. Whether or not this is the case, we may never know. What we do know is that many view Bonds's single season home run record of 73 and career record of 762 as "tainted" because of his PED usage. 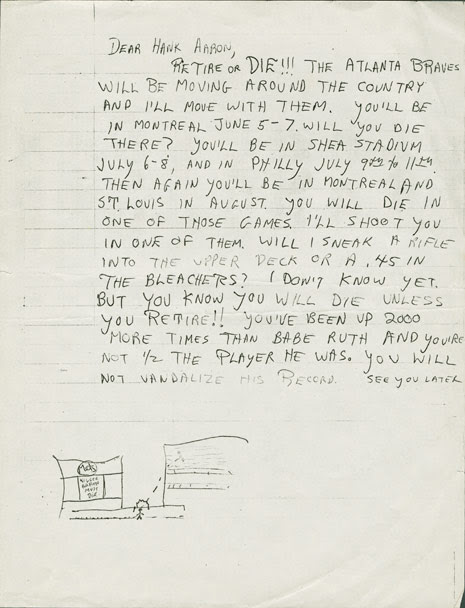 During the lead up to Bonds's surpassing of Aaron's home run record on August 7, 2007, Gaines wrote an open letter to Hank Aaron in The Atlanta Journal Constitution urging him to support Bonds's pursuit of the all time home run record. Gaines draws attention to the vitriol that Aaron endured during his own pursuit of then record holder Babe Ruth in 1974. At the time, in 1973 and 1974, Aaron received numerous death threats. Gaines writes, "How soon people forget. Some. Not all. Because I can remember the days when you were approaching Bab [sic] Ruth's homerun record that some of the same people condemning Bonds today were sending you death threats. Why? I'll tell you why. They did not want to see a Black man break the greatest record set by a White man in sports." The letter to the right shows the hate focused on Aaron and his pursuit of Ruth's record. Just as Aaron received hate mail from individuals who did not want to see him break Ruth's record, Bonds received death threats as well. It is not clear, though, if these were racially motivated. We can presume that the threats contained racist language and overtones.

To me, the most interesting part of Gaines's letter comes when he says that everyone isn't like Aaron, Mays, or Jesse Owens. Gaines says, "Some of us are arrogant. We feel that once we do our work on the field, that should be enough to satisfy the fans." This statement reflects Gaines's thoughts on his own writing as I have written about before on this blog. This arrogance makes some people afraid, though. Gaines continues, "All geniuses are arrogant. Bonds wears his arrogance on his sleeve. And the White world doesn't like it. If you are Black, you are supposed to be humble." He goes on to say that he is not sure whether or not he would even like Bonds if he met him. That, however, is beside the point. The point is that the white media looks upon self-assertive, "arrogant" Black men as a danger. If the player was white, would the media view him the same way? 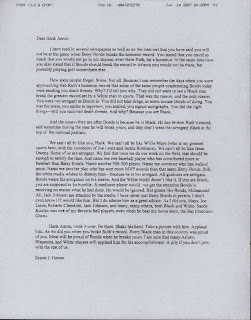 Aaron did send a message to Bonds when he broke the record. After Bonds's 756 home run, Aaron appeared on the big screen at AT&T Park and said:


I would like to offer my congratulations to Barry Bonds on becoming baseball's career home run leader. It is a great accomplishment which required skill, longevity, and determination. Throughout the past century, the home run has held a special place in baseball and I have been privileged to hold this record for 33 of those years. I move over now and offer my best wishes to Barry and his family on this historical achievement. My hope today, as it was on that April evening in 1974, is that the achievement of this record will inspire others to chase their own dreams.

What are your thoughts? I bring up all of the other items here because of the incidents in Baltimore and the cancellation of two of the Orioles's games against the White Sox and because of Alex Rodriguez passing Willie Mays for fourth on the all time home run list. He accomplished this on May 7, 2015. For article questioning he issue of race in regards to Bonds's pursuit, see this article from 2007 in The Independent.
Posted by Unknown at 6:00 AM