New Items in the Collection and Marginalia

On Tuesday, I wrote about Sister Mary Ellen Doyle's involvement in the Selma to Montgomery marches in 1965 and how they impacted her life and career. Recently, the center received items from Sister Doyle to add to the Ernest J. Gaines collection here at UL Lafayette. Today, I would like to take a moment to highlight some of the items and to discuss their importance to the collection. sister Doyle sent newspaper articles, scholarly journal articles, and reviews about Gaines and his work. Along with these items, she also donated correspondence between Gaines and herself, her collection of Gaines novels, and lectures that she delivered on Gaines at various occasions.

We just received the items a couple of days ago, so I have not had the chance to scour through in full yet. However, I did notice a couple of things that I would like to share with you today. For one, all of Sister Doyle's books contain detailed marginalia. What do I mean by this? On the first couple of pages, she briefly summarizes each chapter in the novel and then summarizes key points. Throughout the chapters, she makes notes and underlines important texts. Why she would care about her marginalia? I recall visiting an exhibition of books from Thomas Jefferson's library once. There, in each of the books that were on display, I could see his marginalia notes. He wrote in his books. He conversed with the books. We have to remember that books, even though they are inanimate objects and we read them, typically, in solitude, are not solitary experiences. When we read, we interact with the author. Marginalia allows for a conversation to occur, and it also provides a space for notes and ideas to be remembered. Perusing Jefferson's marginalia provides us with insight into Jefferson's mind and also into how he interacted with the text he was reading at the time. Jefferson's marginalia even allowed scholars to denote books that were sitting in a special collection in Washington University for 131 years as books that once belonged to Thomas Jefferson. For another article on why marginalia is important, see "Book Lovers Fear Dim Future for Notes in the Margin"; it discusses marginalia by Mark Twain in a book about how to turn a profit in publishing books. 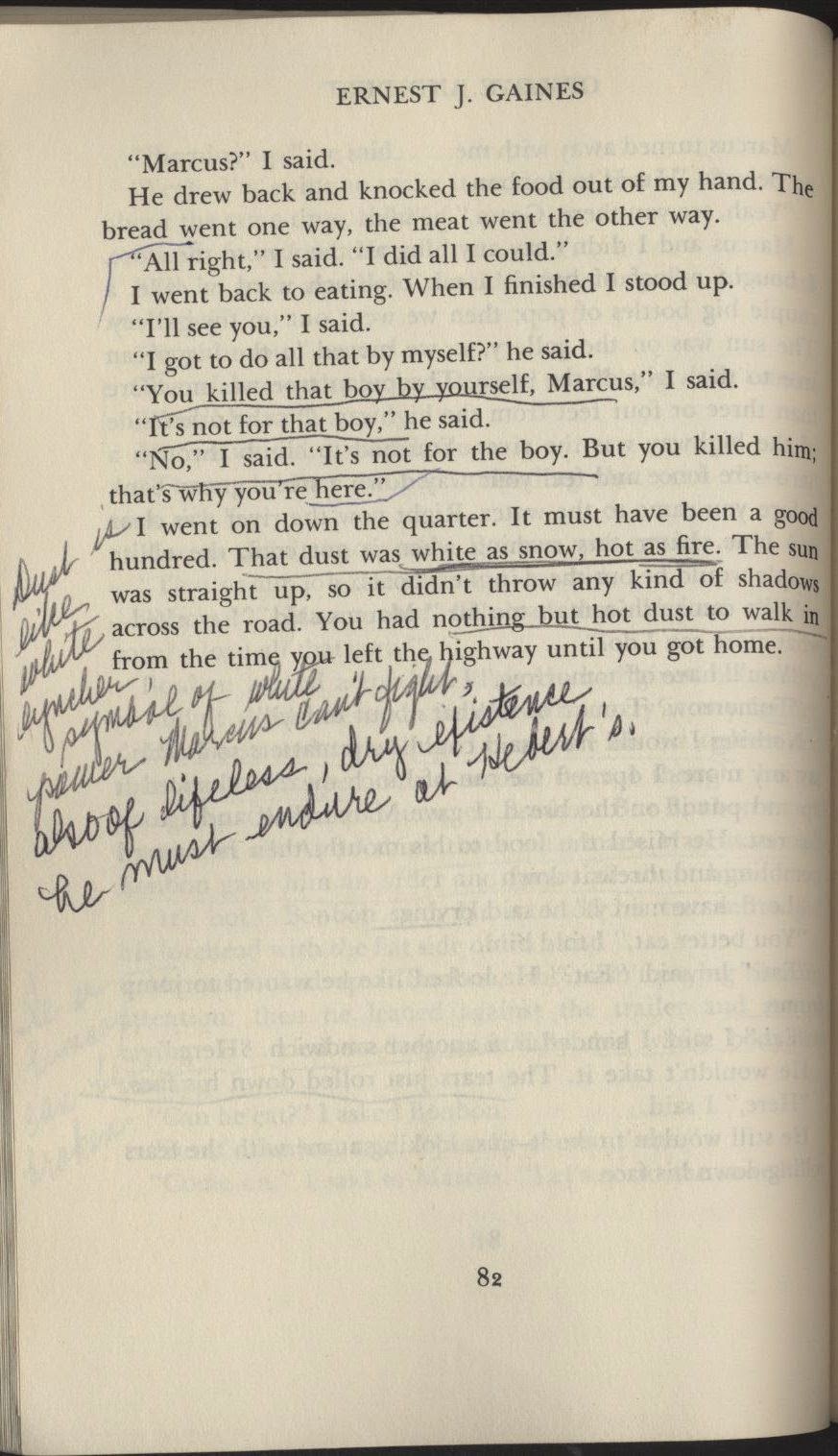 Back to Sister Doyle's marginalia for a moment. One of the first things I did when I received the books was flip through the to see her copious notes. While doing this, I lighted upon a couple of pages and topics that I have written about in the blog. Low and behold, on the pages were Sister Doyle's notes. Sometimes they agreed with what I though, sometimes not. However, they always provided me with more insight not only to Gaines's writing but also to Sister Doyle as a scholar and writer herself. The images provide two examples of Sister Doyle's marginalia. The first is from Of Love and Dust. Here, she speaks about the symbolism of the dust in the novel, something I posted on recently. In the margin, Sister Doyle writes, "Dust like white lyncher, symbol of white power Marcus can't fight, also of lifeless, dry existence he must endure at Hebert's." Sister Doyle's notes here summarize, succinctly, the symbol of dust within the novel, and they also make me think about the line that she has underlined in the final paragraph: "That dust was white as snow, hot as fire." The comparison of the dust to "white" snow is unmistakable, and I think that Sister Doyle's insight here helps to make that abundantly clear. 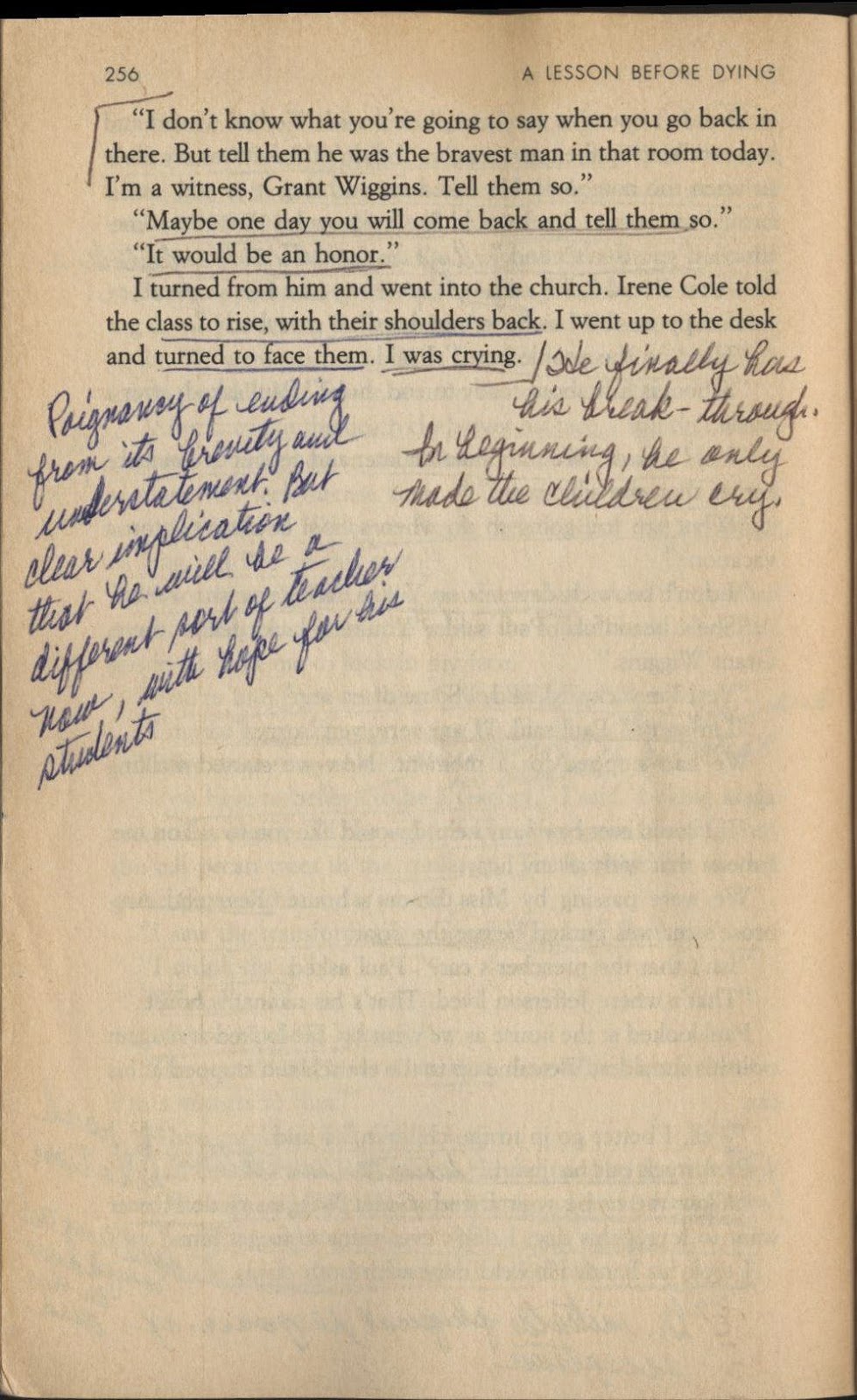 I also opened A Lesson before Dying and looked at the very last page, curious to see what Sister Doyle would write on the final lines of the book. Here, Grant has just heard about Jefferson's execution, and Paul gives him Jefferson's diary. The novel ends with three simple words, "I was crying." Again, I have written about this before, so I was curious to see what her thoughts were on the final line. Specifically, her initial thoughts before she transferred them into a longer piece. In regards to the last line of the novel, she writes, "He [Grant] finally has his break-through. In beginning, he only made the children cry." Her notes here make me reexamine what I initially thought about Grant crying at the end of the novel. I do see it as a "break-through," but I did not necessarily relate his crying here to his actions earlier where he made the children in the school cry. The other note is about style and form as well as themes. She writes, "Poignancy of ending from its beauty and understatement. But clear implication that he will be a different sort of teacher now, with hope for his students." This simple note provides us with insight into Grant's transformation, but it also causes us to look at Gaines's style and form in the novel, and specifically how he uses it at the end.

With this post, I wanted to highlight the importance of writing in books. I write in books to remember thoughts and to converse with the author. I always tell my students to write in the margins, but most of them still don't. We view books as something sacred that should not be tampered with. That's not the case. What do you think about marginalia? Is it something that is important? Or, is it something we shouldn't care about at all?